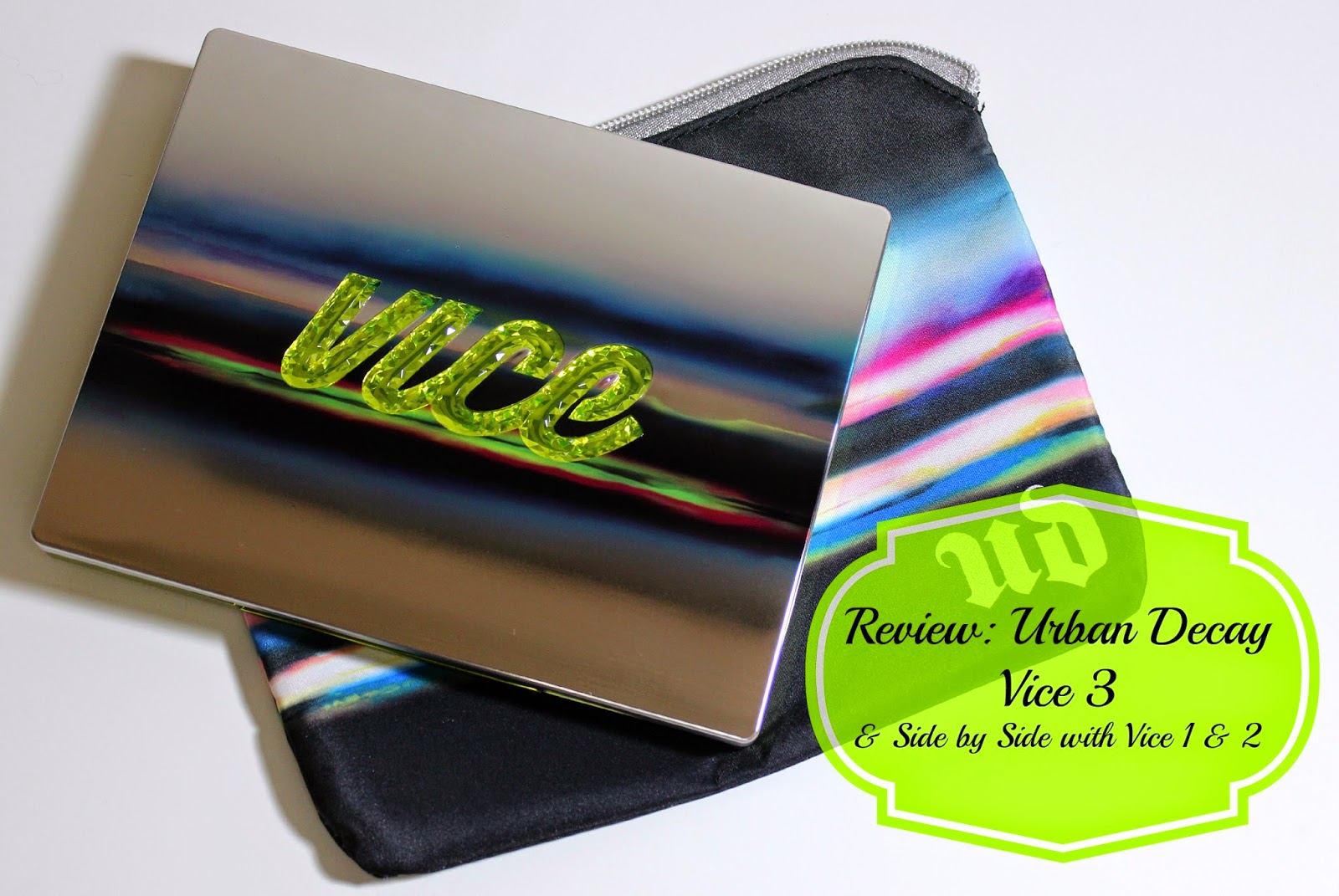 It's that time of year...fall launches, whether it's previews of fashion for Spring/Summer 2015
or new makeup hitting the shelves for Fall/Christmas launches 2014 the beauty/fashion world is all a buzz with new trends and color palettes for the upcoming seasons. This also means that Urban Decay has launched their third Vice palette! The Vice palette is kind of a trend round up in my opinion and it's a little more flashy than the, now (also) yearly, Naked palette. If you've been uninterested in the previous Vice palettes because of their lack of wearable hues, you may want to take a look inside the 2014 Vice 3. I hope you like picture...because this post has a lot! 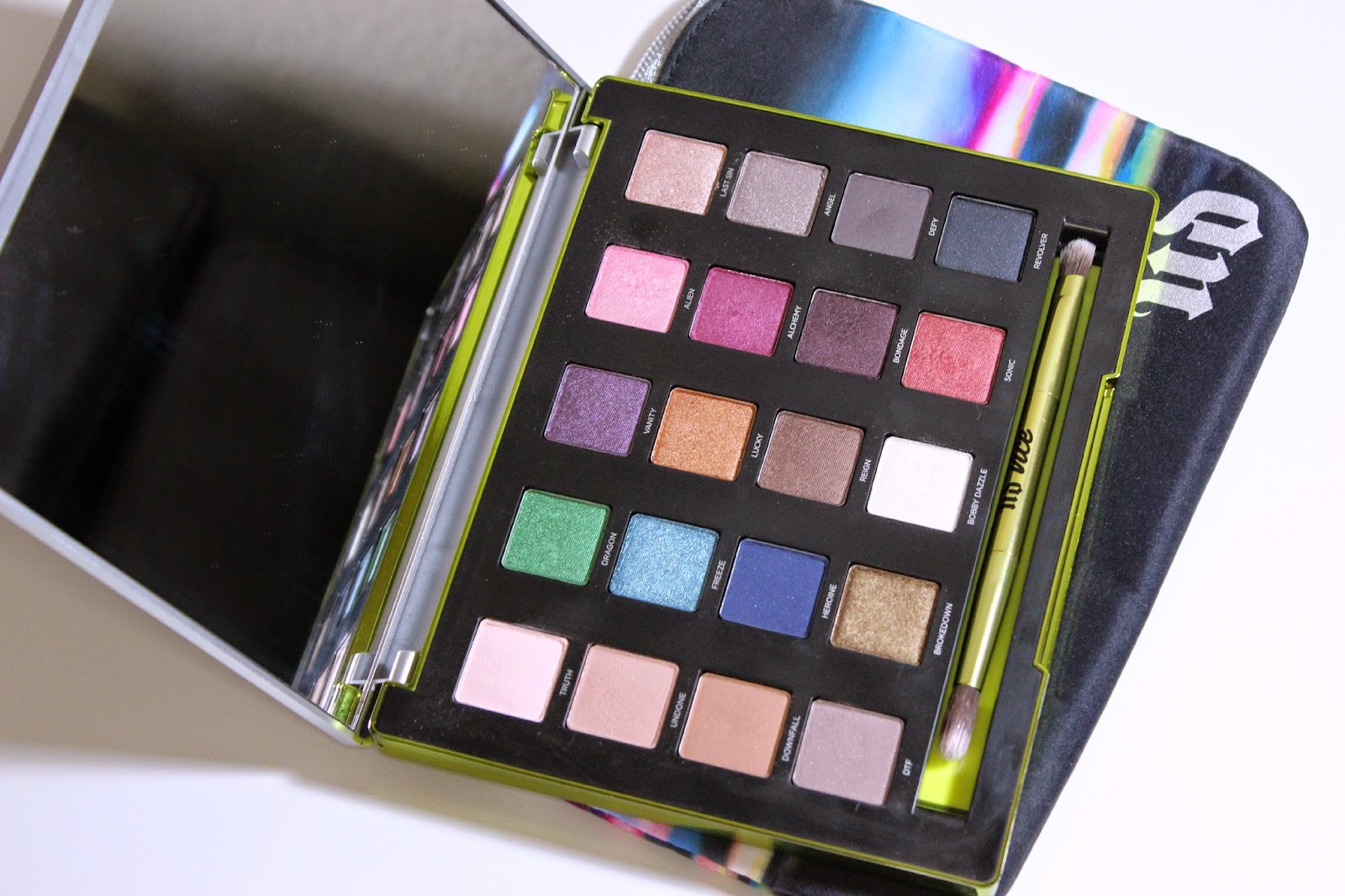 The Vice 3 has a much more sensible set up, somehow it just seems much more functional for the makeup novice and frankly even the expert. The shadows are seemingly lined in columns of four that could easily be made into a full look; from neutral, to funky, to classic, to something in between. There are no glitters this year...*a moment of shock*...Urban Decay, not including a glitter shadow? It's like I don't even know them! But there are plenty of high intensity shimmer with micro glitter that reduces fall out and fairy dust cheeks. The brush hasn't changed from the last palette, it gets the job done and blends fairly well. Column 1 is a neutral lovers play-ground, these shades are an eye look by themselves or can be used as transitional tones. The only thing is they are a little on the chalky side for Urban Decay. I was a bit disappointed with that, though I was able to make a look with them all the same. They're all matte with a small amount of shimmer flecks running throughout.
Column 2 is a more for the adventurer. These as all high shine shimmers other than Heroine which is a almost matte finish with a bit of shimmer running throughout. Brokedown would be perfect for an all over the lid color for a metallic smokey, olive, bronzed eye, maybe paired with a berry lip! Freeze and Dragon would be great pop colors with a neutral eye or even with a evening smokey look. Also, Dragon on top of Brokendown makes a gorgeous olive green. Column three is gorgeous! It could be a stand alone quad and I would buy it. Bobby Dazzle (lol) is a snow white, shimmer and the other three shades have the most buttery texture and blend out so well. I can imagine some great fall looks to be made with these four colors. Lucky is like liquid metal on the lids and is made even more intense when applied with a damp brush. Yes!
Column four is an autumnal dream! Let's just take a moment to look at Sonic *angles sing*, it's like a salmon, penny, bronze molten metal!! Ahhhh...I can't! Bondage says "Hi, I'm made for a smokey eye." and Alchemy and Alien are the most lovely too, I can see some Valentine's look here. Column five is perfect for a smoldering Charlie's Angel or Bond Girl look. It's neutral but is also not tame by any means. Revolver is quite smartly named as it has a soft gun metal quality to it. Last Sin is ironically, heavenly and Defy is a satin finish (as is Revolver) with a soft shimmer throughout. Angel is a lovely grey/champagne shade that would look great on it's own. What are the major differences between the last two? Well, Vice 3 is a considerable amount thinner and has a sleeker feel to it. The mirror is just as large, which is nice when traveling. It also does not feature the cool but not necessary push to open button, instead it has a magnetic closure. This year the price went up from $59 to $60, but you get a makeup bag, so it's worth it. You get 20 shades with 0.03oz of shadow; a UD single shadow is priced at $18 and has 0.05oz, so that gives you an idea of what a value this palette can be. 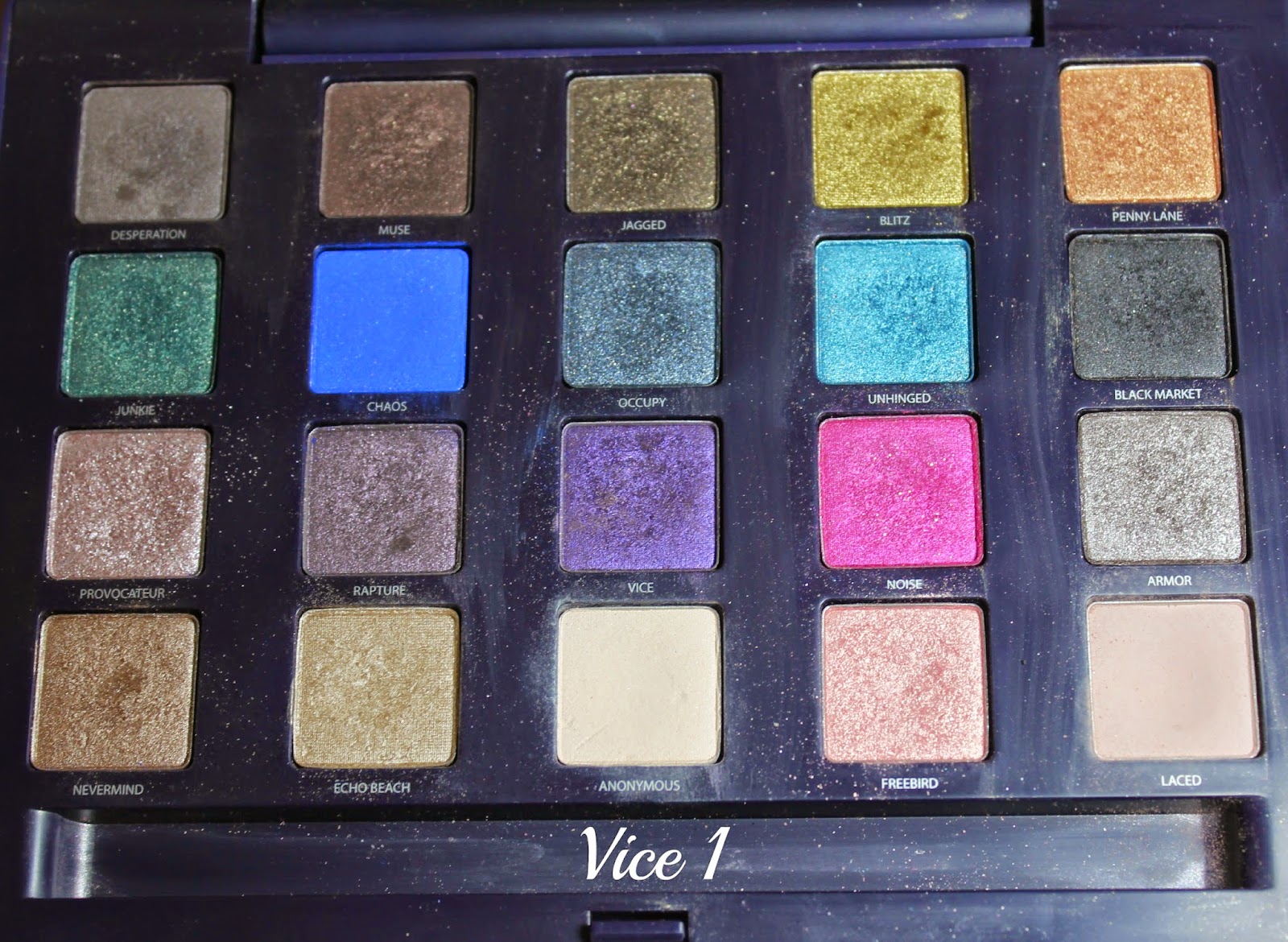 The original Vice palette had some stand out shades, like Laced , one of my all time favorite shadows. There was just too much glitter and a lot of fall out from that formula at this time. 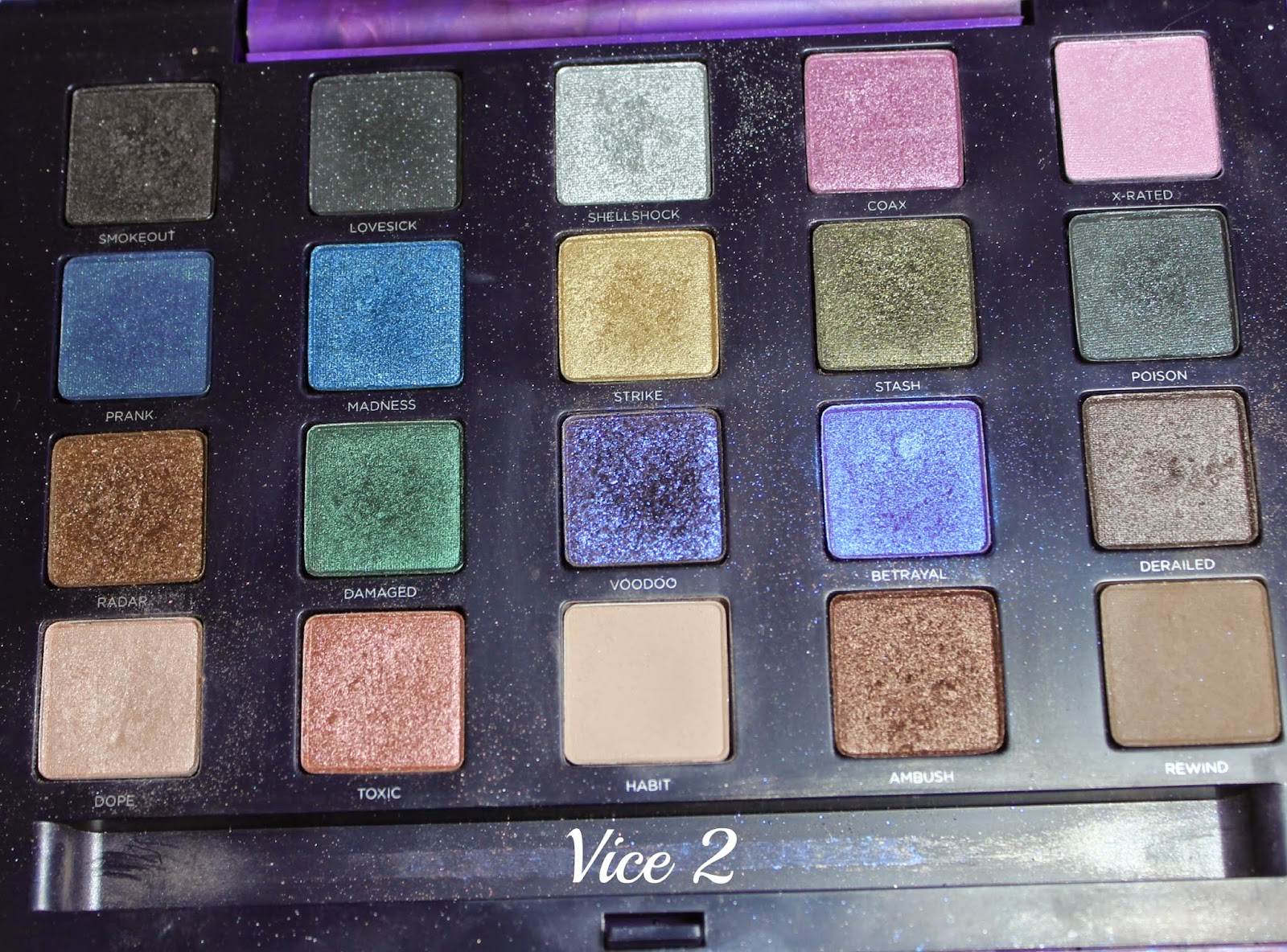 Vice two was a step in the right direction. The shades made more sense when it came to creating looks and I got much more use from this palette. The shade were not as in your face, but it still had room for improvement. 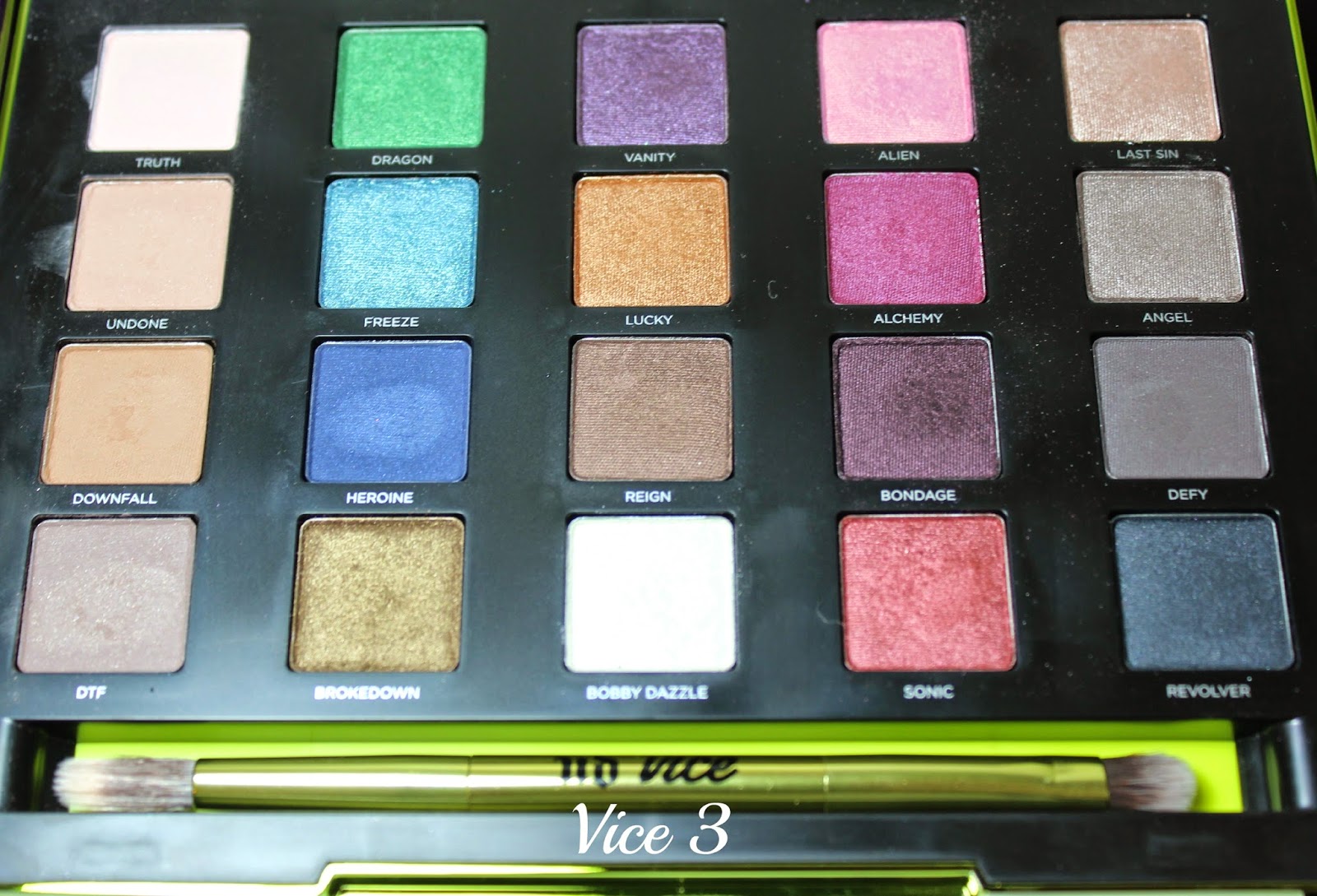 Vice 3, though bold, I think is the best Vice yet. My only complaint is that the first column of colors is somewhat chalky. All the shades are super pigmented, as is standard for Urban Decay and I think that this palette would actually be a smart purchase for someone getting into makeup. It makes sense and has a lot of wearable hues. The formula for the shimmers and satin shimmers are the best they've been for UD and I have to applaud them on the assortment of shadows. It hits all the right notes for me with the upcoming seasonal trends.

Now that you've seen all three Vice palettes side by side, what are your thoughts on Vice 3?
Tell me in the comments. Also, if I were going to do a look from this paletta what colors would you like to see me use? I hope that you've enjoyed reading this post. Twitter, Instagram & Tumblr.
xoxo, Amanda