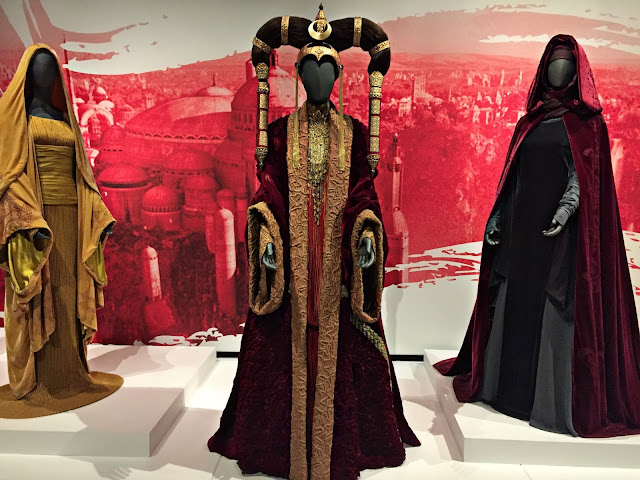 If you have lived on the planet anywhere since May 25th. 1977, you likely have seen, or at the
very least heard of, The Star Wars Saga. The attention to detail in these films are out of this world, no pun intended. The way in which these worlds come to life is not just sets and CGI but in the way the costuming brings the characters themselves to life, making these galaxies, by George Lucas, feel very real. 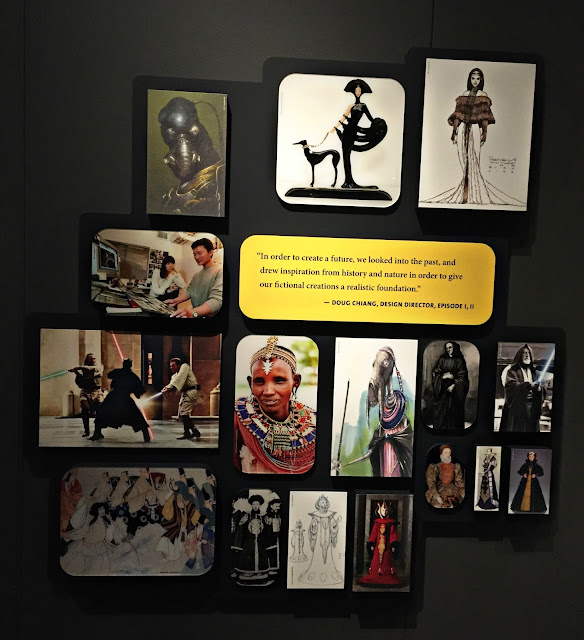 The beauty of this exhibit is that not only were the costumes in the room to be ogled over, but the inspiration behind them as well, along with video interviews with costume designer Trisha Biggar and the actors, oh, and of course, Mr. Lucas. Inspiration was pulled from old world designs and historically, archetypal looks. In a way, we've seen these clothes before and somehow nothing like them at all. We know who Han Solo is before he says a word. He's a cowboy, an anti-hero, the man who never asked for this. He's the guy who gets the job done with his best friend, a snappy tongue and a gun. 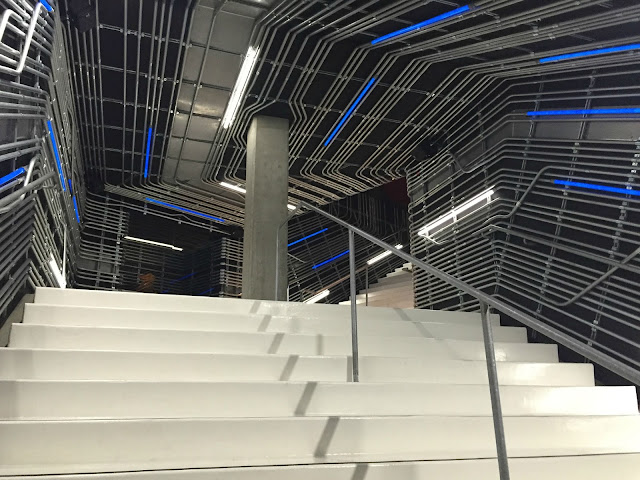 Entering the exhibit I felt that rush of childlike excitement entering Disneyland. I am a lover of both Star Wars and story telling through visual aesthetic. Much like makeup, costuming adds the layers to a story that turn an actor into the character, not only for the audience but the actors themselves. 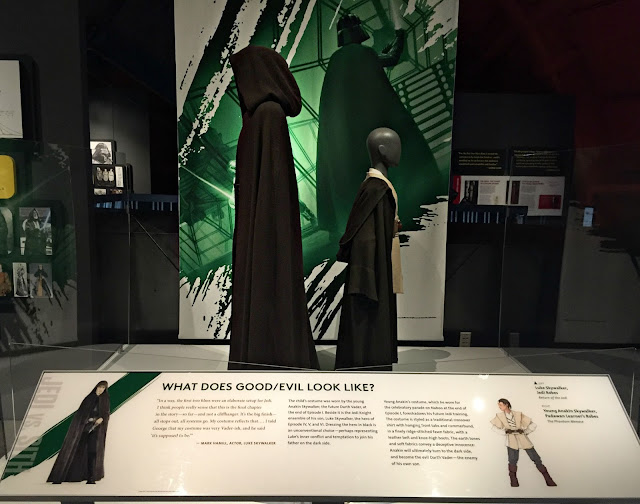 George Lucas was able to create not only some of the most iconic characters in film history but also some of the most recognizable costumes as well, along with his team. If you see a Jedi outfit you know right away what it is. Each Jedi has their own look, but their costumes also have that string that runs throughout marrying the look as a symbol of a people. Part monk, part knight, part samurai. 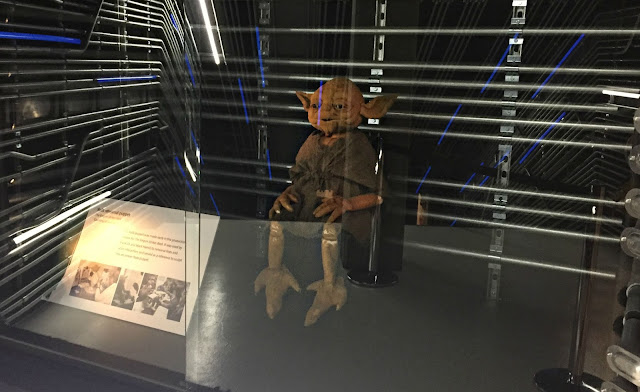 One of the most instantly recognizable characters was seated in glass box. In the original films he was a puppet and as technology advanced, by the prequels, he was made CGI. 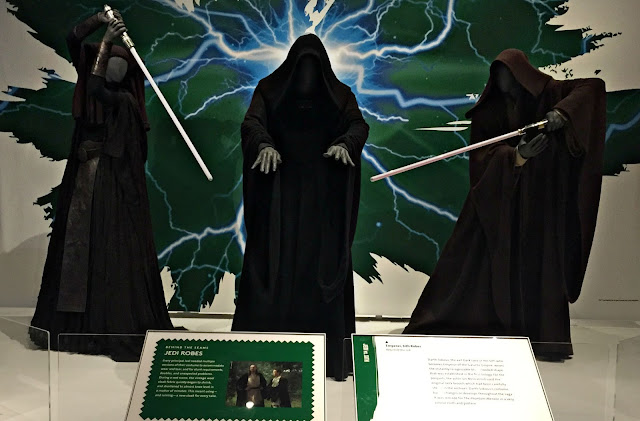 Jedi Robes: Somewhat biblical, a bit futuristic, these outfits are so iconic even well known actors are beyond thrilled to put on one of these robes and to play a part in these films.
Samuel L. Jackson said "When I got to London the first time, I had no clue who I was going to play until they gave me some pages and saw I was going to be Mace Windu. Who? And then I saw he was talking to Yoda. So when I get to the studio the next day, I saw this Jedi costume, and was so ecstatic I ran out of breath. At last I had an idea of who I was, how to carry myself, and I had a way of being. And I had a reason for being." 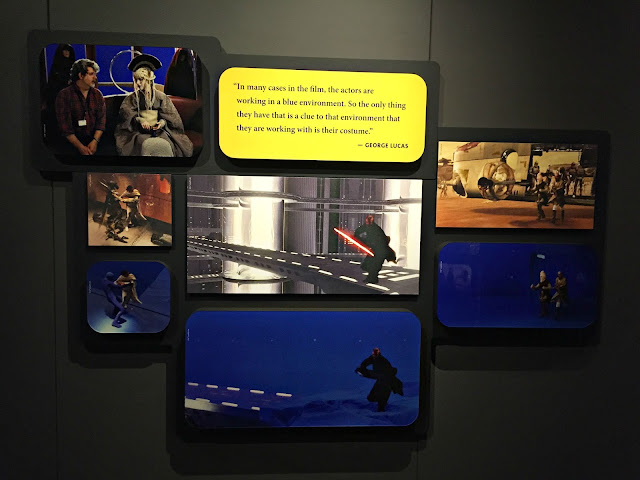 Often, as George Lucas describes in the quote in this picture, actors, often in fantasy films, rely on costumes to set the world. Much of the work is done on blue screen so that these worlds can be built in post production CGI. The costumes and makeup, which is just as much a part of the costume, gives actors that sense of reality that wires and blue screens strip away. 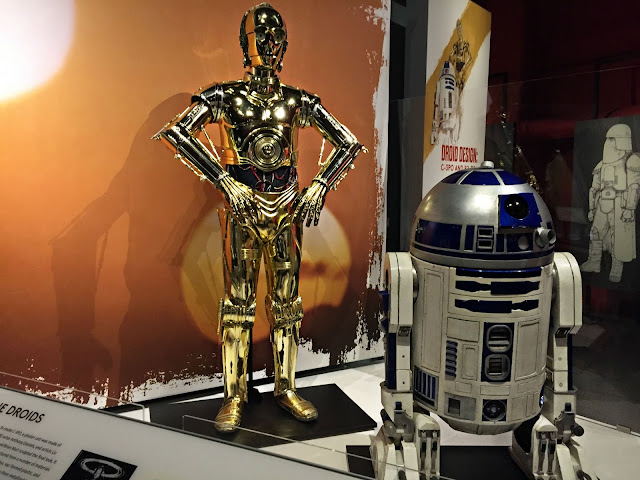 Some people may not realize that these two well adored characters are not in fact robotic, but costumes. In fact the the man who designed C3PO designed Boeing air planes before that. 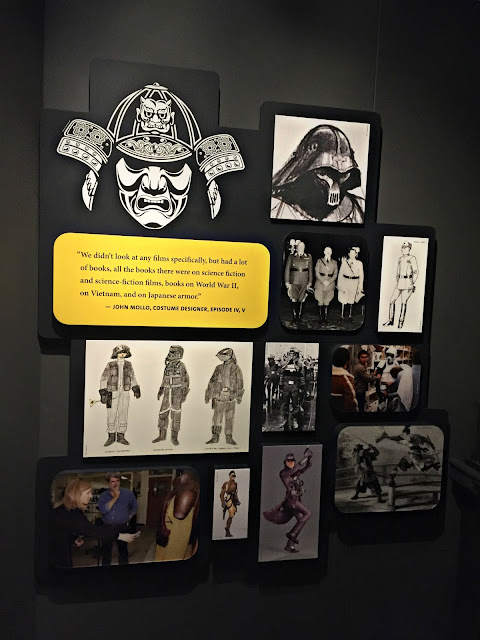 In Star Wars, and in culture, we see shapes and styles that we know and associate with types of people or an archetype. This is why costuming tells a good part of a story, it tells you how a person carries themselves, what class they fall into, if they play a powerful role or if they are the downtrodden. Even the stories of The Star Wars Saga, as grand and other worldly as they are, have threads woven again and again through time. Good vs. Evil, finding love, a damsel in distress, an unlikely hero, a destiny to be followed, challenges to overcome and battles to be fought surrounding people, class and government corruption. 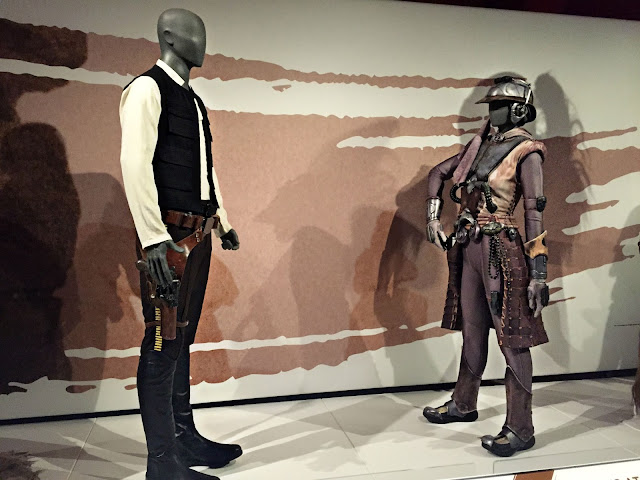 Han Solo, owner and pilot of the freighter ship, Millennium Falcon (above left) had a look that was inspired by George Lucas' interest in American Westerns. Actor, Harrison Ford, had some input as far as the costume went as well. Originally the collar for Han was a 1970's style over sized collar which Ford said had to go. I happen to agree that the end result is more timeless and way more bad boy. 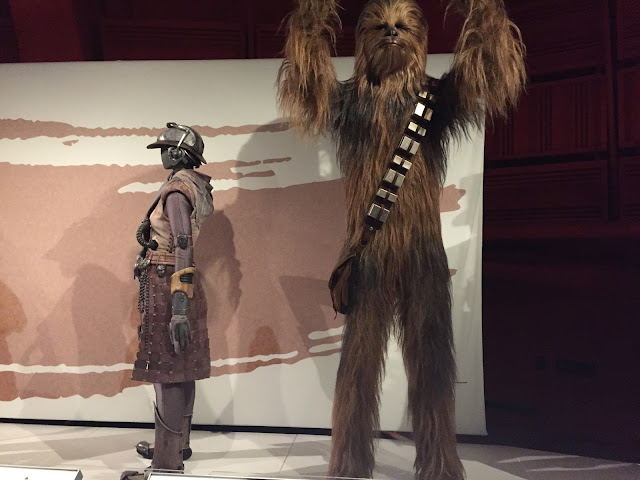 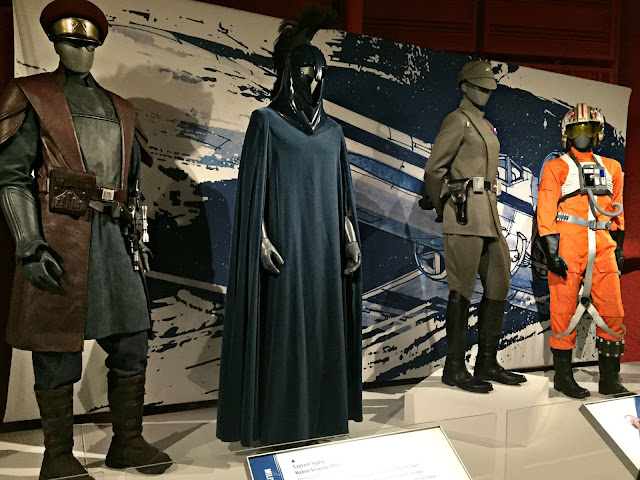 Because of the genius costuming we are able to have a greater understanding of these smaller characters that may have shorter screen time than main characters do, We know what part they play in this new world. Ideas like that make you think about how often this is true in the real world. Clothes are costumes we pick for ourselves, they tell the world a story about us, they make us carry ourselves in different ways and see others in different ways too. 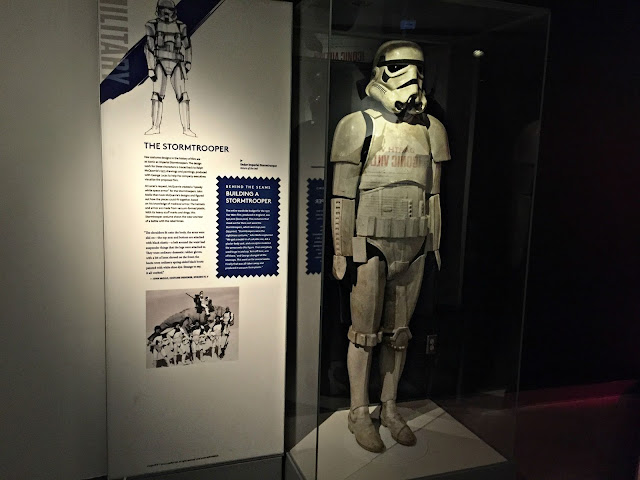 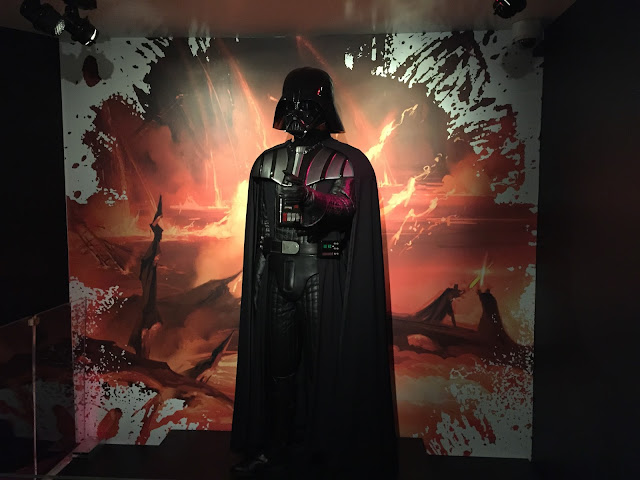 In this world the villains get as much screen time and back story as our hero's do. This gives a richness and complexity to these evil forces. They are not just the "bad guys" they are human, broken, dark and in the case of Darth Vador, once loved, now feared. Vador is perhaps the most iconic character in the films. The world knows his mask and he is a favorite even with his darkness.
Vador's costume, as mocked up, was a German helmet, a military gas mask, a monks cloak, a leather motorcycle under suit and a medieval style metal breastplate. This was all used as previsualization for the final look. 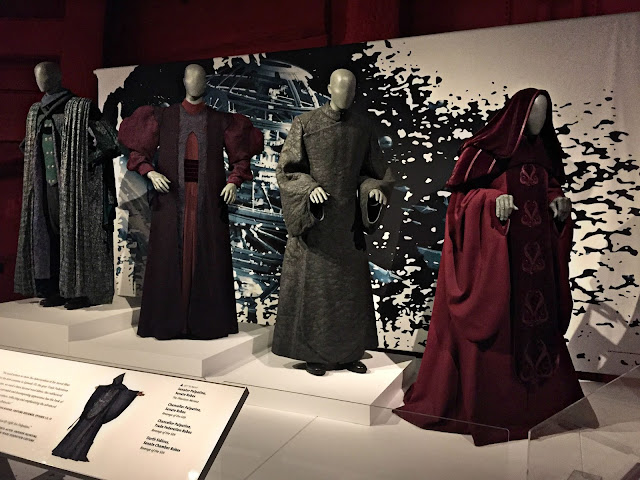 This was a great way to show how costumes tell a story all alone. Senator Palpatine's de-evolution is shown here. It is clear to see darkness taking over a man in Episode I, II, & III. We don't see the black cloak until later on in the films. Here is a trusted senator slipping into an evil he can no longer hide. Ian McDiarmid, who plays Sentaor Palpatin/Darth Sidious, throughout the original film and the prequels said "These are, in fact, operatic films, a 'space opera', I suppose. There are different colors, different flavors,and themes such as you would find in a great symphony or an opera. They have that kind of archetypal feel. In terms of aspiration alone they are Shakespearean, Wagnerian. To wear these fantastically operatic costumes in playing the character was wonderfully empowering." 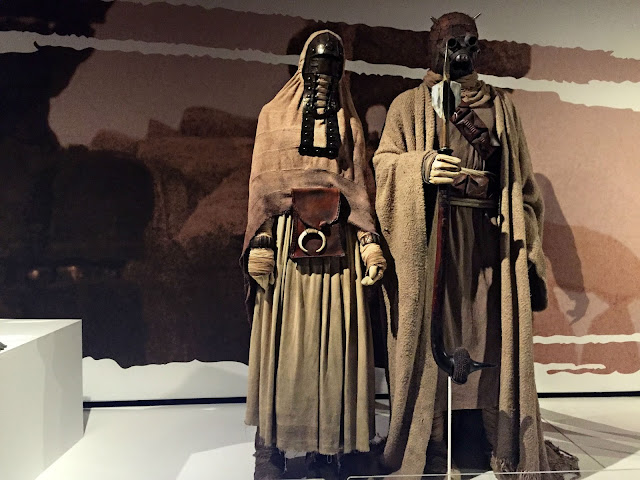 Then there are characters we almost care not to know. They seem so other to what we know that they are frightening to be unveiled. We are told that they are inhuman and barbaric and by being so utterly concealed we believe that. These are the Tusken Raiders aka Sand People. There is something unsettling about not seeing a face, let alone eyes. The costume idea for these people came from the fact that they live in a harsh desert, constantly being blasted by sandstorms in their nomadic lives. 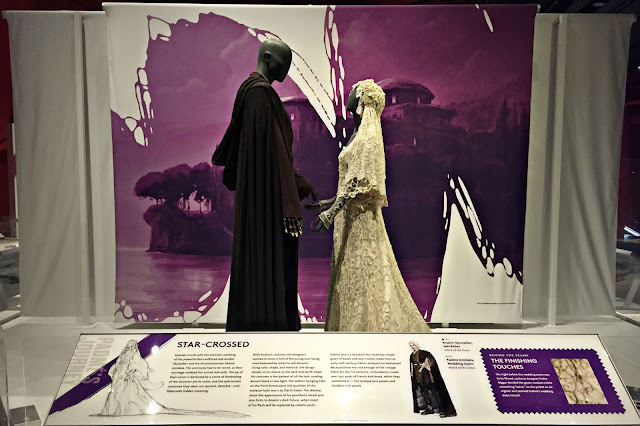 Now when talking Star Wars fashion we know Queen Amidala/Padme is where the avant-garde, high fashion looks come into play. These are the wedding costumes from Episode II: The Clone Wars 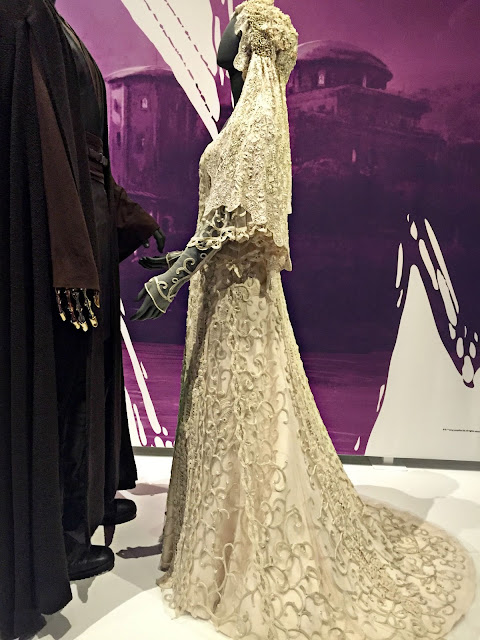 The detailing is amazing. I love sleeved wedding gowns so this got me! A truly royal look. 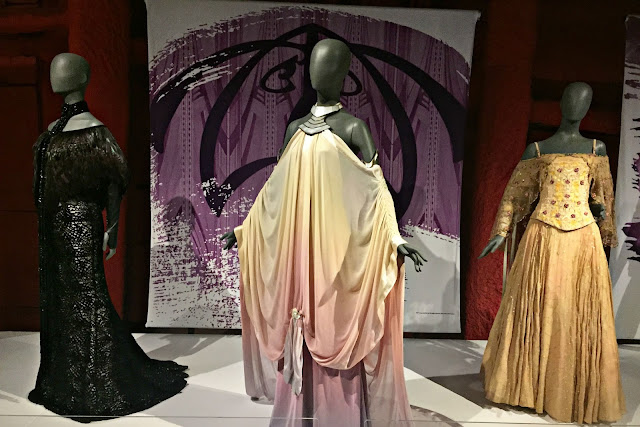 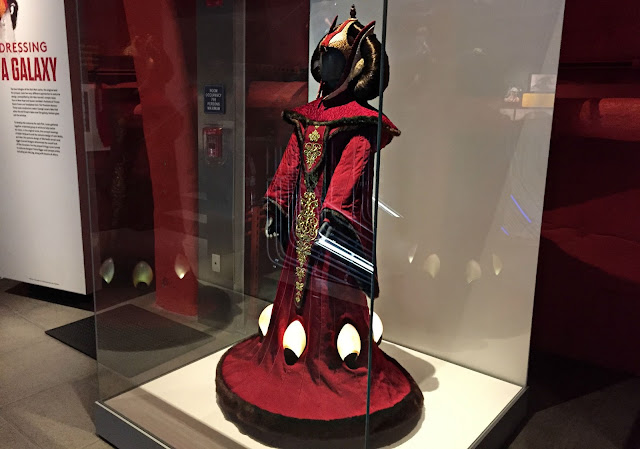 Here is the first costume we see her in in Episode I: The Phantom Menace. Here she is still Queen and has not yet moved to join the senate. 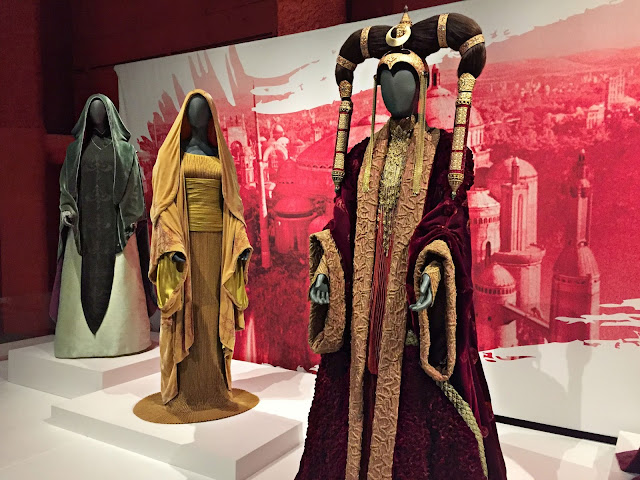 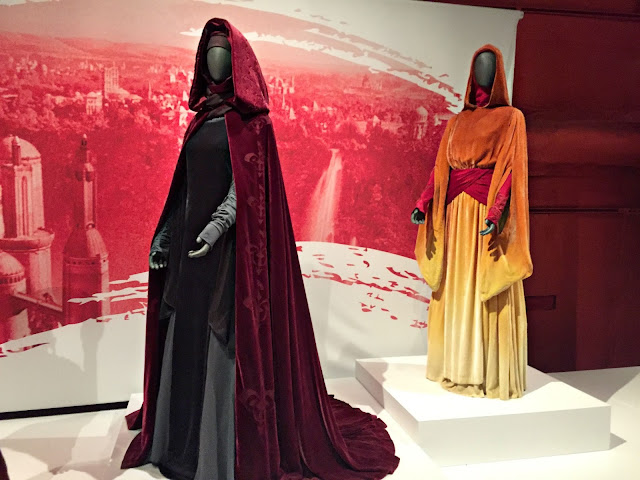 Here you can see here more regal looks and then her undercover as a handmaiden looks as well. 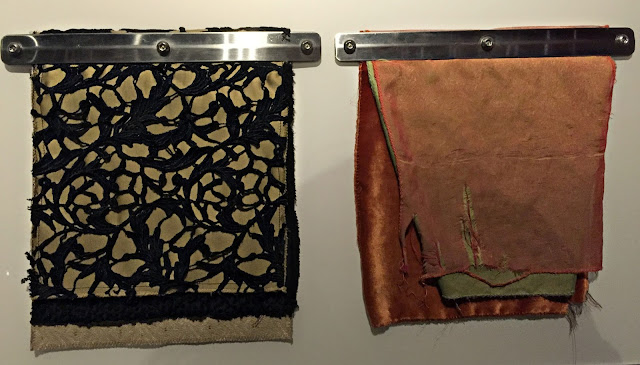 It was a joy to be able to touch the fabric swatches and to feel the rich weight and quality of them. These costumes are as grand as they look on screen, if not more so. To see them in person as an adult who has looked at them on screen over and over as a child was an amazing feeling. It just made me want to be in that world all over again. 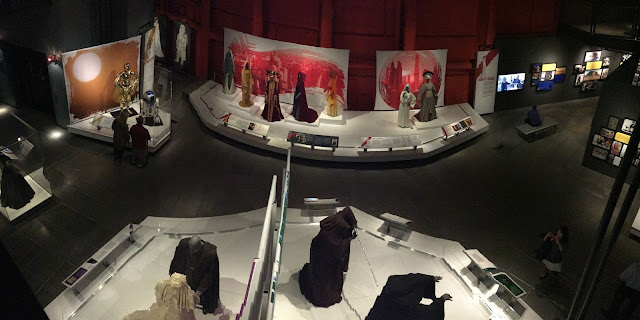 The show room was two stories of these gorgeously made, pieces of cinematic art held an attention that made the room feel almost like a library. Everyone spoke in hushed tones and took time when standing before them. 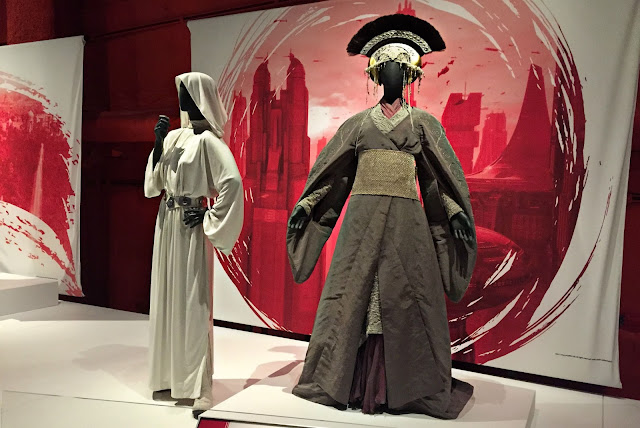 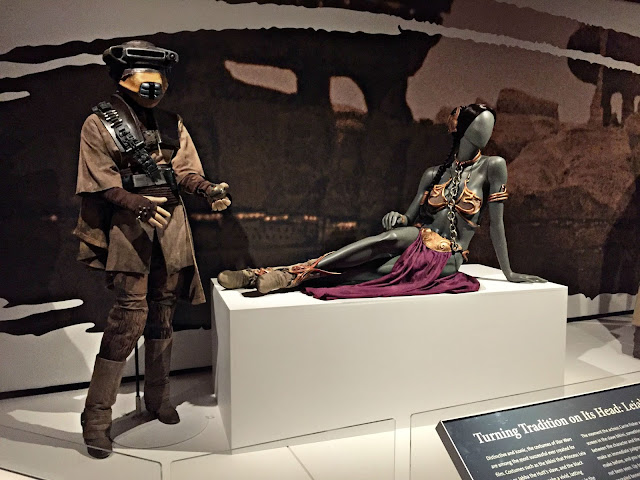 Lastly here is the oh-so-infamous Leia Bikini from when she was enslaved by Jabba the Hutt in Return of the Jedi. Taking the once wholesome princess and turning her into vamp. George Lucas was inspired by films such as Slave Girl (1947) and Maria Montez adventure films from the 1940's, along with actress Yvonne DeCarlo as Salome from 1945. Here's where it gets interesting, at the exhibit it said These early vamp characters functioned largely as sex objects, waiting to be molded by a male character. With the Leia slave bikini, George Lucas, however, turns the idea of "object" on it's head. Leia is not a character that need to be molded. She is exposed and temporarily humiliated, but she is in control, plotting her revenge. Ironically, and somewhat brilliantly, the vehicle for her revenge is the costume itself  - she uses her own chains to strangle her monstrous captor. Isn't it brilliant when we take a classic scenario and give it a makeover. George Lucas not only gave Leia power to save herself (with a little help from her friends) but he made her an timeless goddess at the same time, saying a warrior princess is of high value and is still really hot. haha 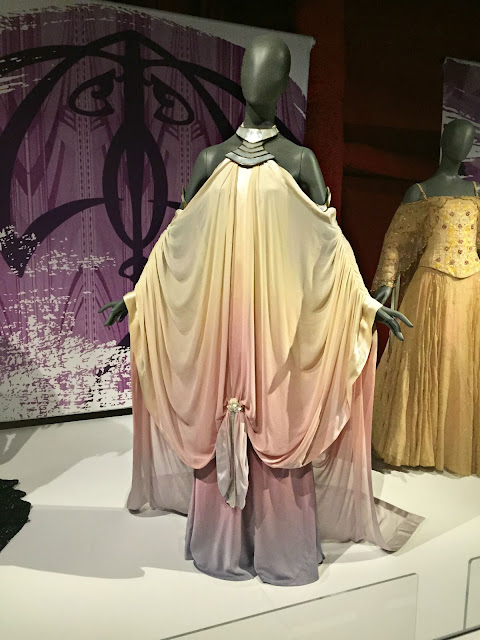 Which costume was your favorite? The above one is mine along with the wedding dress.
This one however is my kind of muted pastels combined with a flowiness I love. All the info I shared was from the exhibit, and the book I bought after called Dressing A Galaxy: The Costumes of Star Wars by Trisha Biggar (Preface George Lucas and Foreward Rick McCallum). I also share personal opinions about costuming and makeup. There is another book I plan on getting called Star Wars Costumes: The Original Trilogy by Brandon Alinger. The exhibit is at E.M.P. Museum in Seattle until 10/04/15. Hope you've enjoyed this look into the world of Star Wars costumes!